“Um. No. Transmisogyny is worse than misogyny because ITS EFFECTS ARE MORE VIOLENT, MORE PAINFUL AND MORE WIDESPREAD. Not because trans*women matter more than cis women or are less equipped to handle misogyny but because trans* women suffer a thousand times more erasure, more verbal and physical abuse, are more likely to be raped, attacked or killed for their sex. “- vivicafux

Ok, only that history completely contradicts this. Female Genocide, Rape? Those things don’t matter because special snowflake boy is now being treated with less respect than what he believes he deserves. So that means ignoring eons of femicide , rape, forced impregnation, poverty and slavery because TRANSMISOGY IS SOOO MUCH WORSE GUYS!

It pisses me off that so many trans activists ignore the fact that most trans people who are murdered are involved in prostitution. I guess that would undermine the whole “yeah, sex work is great and empowering!” bullshit  spin they have going on.

What about Trans Melting Polar Ice Caps (aka sand)?

Call my penis a clit or else! 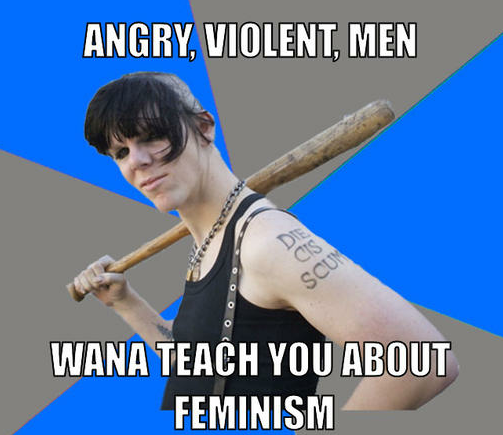 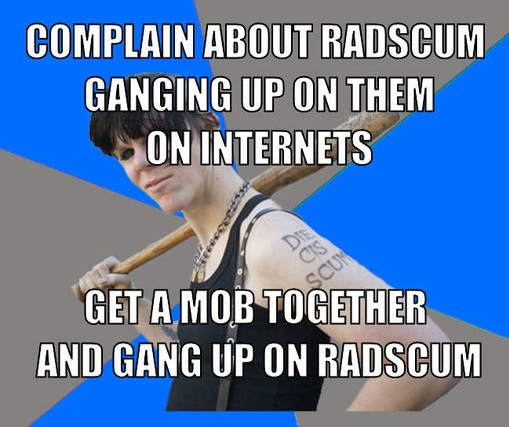 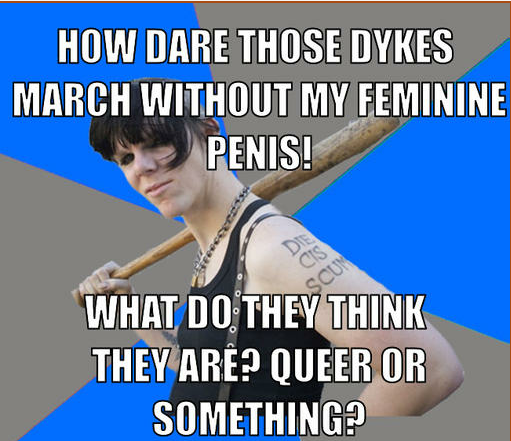 Cathy Brennan was accosted by a group of Trans wacktavists yesterday while at Dyke march in NYC. Will NYC Dyke march condemn the actions of these so called “allies?” A real dyke was verbally assaulted along with the women she was marching with. If these were religious fundamentalists or MRA’s would you be silent?  These people have shown their true selves. Privileged males and their handmaidens who feel the cock should rein supreme over all, including dykes. So I ask again NYC Dyke March…will you not support a fellow woman and lesbian over these vicious attacks/violence she and her companions suffered during your march?

In the future, when picking an acronym, try not to make it as faily as T.E.R.F. (Trans Exclusive Radical Feminism) When I read the term it sounds like radical feminism that’s all about teh twanz. Here are some more appropriate uses of the acronym T.E.R.F.