Transgender former banker, 55, has her ears and nose REMOVED to transform into a ‘dragon lady’ with scales, a forked tongue and a horned skull 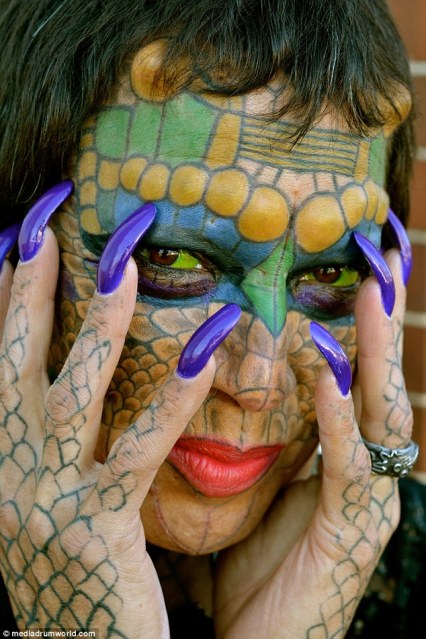 On her website, Tiamat explains: ‘I am the Dragon Lady, A pre-op M2F (male to female) transgender in the process of morphing into a human dragon, becoming a reptoid as I shed my human skin and my physical appearance and my life as a whole leaving my humanness behind.

She adds that she wants to embrace her ‘most natural self awareness as a mythical beast.’

Was chatting with a friend tonight about Germaine Greer and how women have it worse now then they did in the 70’s. She’s not wrong. Porn, male entitlement and the rise of the lad/bro, fun fem, queer culture has pretty much made any woman a walking target for misogynistic abuse, stalking and worse. I doubt the trend of no women’s space unless a prick is present escaped Greer’s keen notice, but she wouldn’t dare mention that without fear of another glitter bombing attack and black list from the man stream media. Anyway my friend was telling me about an awesome quote by Greer about the rise of the trans back in 1999. I googled it and found the quote on “rational”wiki.

Oh of course! TRANS WOMEN HAVE ACTUALLY DIED GETTING UTERUS TRANSPLANTS. JFC. What Frankenstein quack performed these mythical surgeries?  What women are they getting these uteri from? Please tell me. Out of sheer curiosity I decided to google if any trans women have had any such bull shit surgery (SURPRISE! they haven’t). But, I did find an article about a dude who wants to have one and a doctor quoted him the price of 250k.

Each of us has a story or a script that we fashion and live our lives by. When it takes us down the wrong path, we rewrite the script from a wiser place, and navigate closer and closer to our truth. Sarah Luiz says she knows in her heart of hearts that she’s living a life true to her being — which is why she feels confident she’ll be the first transgender woman to give birth.

Luiz has begun the medical candidacy interview process, and she says New York doctors at Downtown Hospital are looking her way.

“They need to have the right person,” she says. ” If you did this with a woman, amazing. If you do this with a transgender woman, it will receive a lot of attention.”

Reading the story we learn that “Luiz first made news when she sued insurance giant Blue Cross Blue Shield for her gender reassignment surgery.” aaannnnnnd….

So to recap, a biological man, who maybe had SRS, ( he said a Brazilian millionaire gave him the money, there are a lot of millionaires in this guys life even though he’s now a prostitute) thinks he’s going to be given a uterus and ovaries by a biological woman (how this would even happen is anyone’s guess)  they’ll all work fine and dandy, with no rejection and be able to deliver a healthy child at 44 years old. Magical thinking, delusional? NO THAT’S TRANSPHOBIC.

About a year and half ago, Luiz started writing a book and putting her life together emotionally and spiritually, to find some closure with her past. She stopped looking outside and started looking in.

The book is also a way to earn money to pay for the uterine transplant operation she desires.

The price tag for the surgery not cheap at $250,000 — but that doesn’t daunt Luiz, who now works as a server at a local restaurant chain.

Luiz has always wanted a family and has been considering adoption for more than 20 years, but the time has never been right. Now, with the cutting edge medical technology in New York, she wants to have the child herself.

“Am I too greedy to put a live human being through this?” she torments herself with during sleepless nights. “This child may become the most famous child in the world.”

She says she answers the question in her heart of hearts, “No.”

Hey are you greedy for wanting to take a womb from another woman’s body, surgically implant it into you and use their eggs and I’m presuming your sperm (unless he’s been surgically castrated ¯\_(ツ)_/¯   ) to create a child so you can live your delusional woman fantasy? Naaaaaaaahhhh.

Luiz hopes to give birth to a girl, though she says she’d be happy with a boy, too.

In the end, she exclaims, “My name is Sarah Luiz, and glad I can I’m believe in my dreams!”

How transphobic. He of all people should know that “genitalia doesn’t make you a boy or a girl!” This was the last comment on the article…

How utterly fucking depressing. I was watching a video of Sarah Luiz on youtube and saw this comment.

So, a gay man gets treated like shit by his family for being gay. Thinks he must really be a woman and instead of getting the mental health issues  sorted, is now  prostituting himself to asshole johns. Sounds like an empowering pomo rags to prostitution Cinderella  story  we should be gleefully applauding instead of seeing this as a failure of the mental health system on all fronts and intense internalized homophobia from years of abuse.